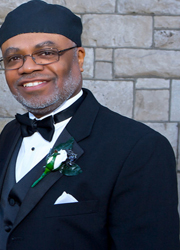 The Rev. Dr. Grady Andrew Yeargin, Jr. was born on November 7, 1949 in Greenville, South Carolina. He attended Sterling High School and was admitted to Morehouse College in 1966 on an early admission scholarship. In 1970, he graduated from Morehouse with a B.A. Degree in Philosophy and Religion, he graduated from Colgate-Rochester Divinity School with a Master of Divinity Degree in 1973, and he graduated from Wesley Theological Seminary in 2005 with a Doctor of Ministry Degree.

Dr. Yeargin began his ministerial career in 1973 as the Associate Minister of the Mount Zion Baptist Church in Newark, NJ under the pastorate of the Rev. Dr. Granville A. Seward. Along with his responsibilities in the areas of Youth Ministry, Christian Education and Neighborhood Ministry, Dr. Yeargin was also responsible for assuming the pastoral responsibilities in the absence of the Pastor.

During his tenure at Mount Zion, Dr. Yeargin served as a board member of the Campus Christian Foundation, the Youth Council of the American Baptist Churches of New Jersey and of the Metropolitan Ecumenical Ministries Committee on Neighborhood and Youth Ministry.

In 1976, Dr. Yeargin was called to pastor the Mount Prospect Church in Rock Hill, South Carolina. Along with providing a new dimension in the area of teaching ministry in the church and in the local Bible College, Dr. Yeargin held positions in both the local and state conventions along with serving on several civic committees.

After serving Mount Prospect for nine years, Dr. Yeargin was called to pastor the City Temple of Baltimore (Baptist) on September 10, 1985. He began his pastorate in January 1986. Dr. Yeargin has brought a new dimension of spiritual nourishment and growth to City Temple through worship, study, and action. Under his direction several new ministries have been established in City Temple that include: the Shelter Ministry, the Dance Ministry, the New Members Counselors Ministry, the Christian Education Ministry, the Courtesy Guild, the Tape Ministry as well as the re-establishment of the Cultural and Fine Arts Ministry and the Building Ministry.

Dr. Yeargin has been socially involved in the life of the community through his participation in Baltimoreans United in Leadership Development (B.U.I.L.D.) as well as serving for two years as a clergy co-chairperson, the Interdenominational Ministerial Alliance, the Institute for Christian and Jewish Studies, The United Missionary Baptist Convention of Maryland, and was the previous co-chairperson of the Baltimore affiliate of the National Black Leadership Commission on AIDS.

Dr. Yeargin is married to Patricia Ann Yeargin and they share two daughters, Adia Joy and Candace. He also continues to maintain his sense of fatherhood to his beloved daughter, Kimberly Rei, who is deceased.